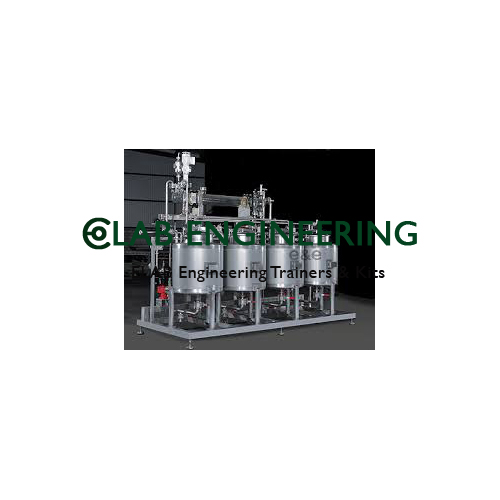 Liquid-Liquid Extraction.
Liquid-Liquid Extraction Technical Description The Liquid-Liquid Extraction  allows liquid mixtures to be separated using liquid-liquid extraction. The liquid mixture to be separated is delivered from the feed tank into the bottom of the extraction column using a gear pump. There, it moves in countercurrent towards the solvent, which is delivered into the top of  the packed column by a diaphragm pump. The mixture to be separated is made up of a transition component and carrier liquid. The carrier liquid and the solvent are insoluble in one another and therefore a phase boundary is established in the column. This can be adjusted using two regulating valves. The movement of the transition component from the carrier liquid into the solvent occurs inside the packed column. Two three-way valves can be used to operate the system as a closed or an open process.   To obtain the transition component and allow reuse of the solvent, the extract can be processed using a distillation unit. This consists of a round-bottomed flask with a packed column and a distillation bridge with Liebig condenser. A hemispherical heating mantle is used to heat the bottom product in the round-bottomed flask. The bottom temperature is measured by a sensor, displayed digitally and controlled using a PID controller. The temperature at the top of the distillation column is also measured. Distillation removes the solvent from the transition component which is collected at the bottom of the unit and can be drawn off as a product. The distilled solvent is collected in a tank and can be reused in the extraction process.   For a ternary material system, boiling petrol is recommended as the carrier liquid with benzoic acid as the transition component and distilled water as the solvent. A pH and conductivity meter is included to monitor the efficiency of the separating process.