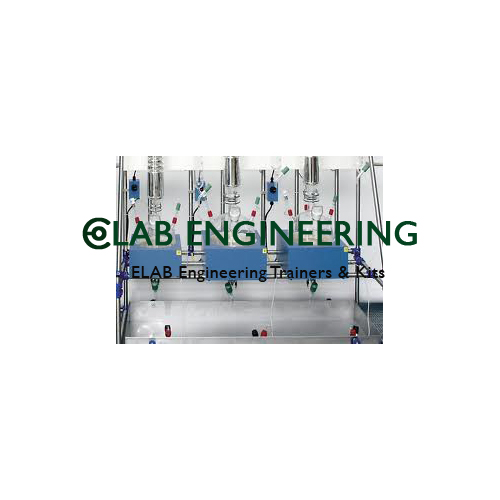 Discontinuous Rectification.
Discontinuous Rectification Technical Description Distillation is used to separate liquid mixtures made up of individual liquids that are soluble in one another. Rectification refers to distillation in a countercurrent. Ethanol/water is recommended as the liquid mixture for the Discontinuous Rectification. The liquid mixture is added to the evaporator (bottom) tank. The mixed vapour produced moves upwards in the column. The mixed vapour contains a higher concentration of the component with the lower boiling point (ethanol). It leaves the top of the column and is condensed using a condenser and a phase separation tank. Part of the condensate is collected in a tank as product while the rest is fed back into the column. Here, on its way downwards, it undergoes further heating and material exchange with the rising mixed vapour. This exchange causes the vapour phase to become richer in ethanol and the liquid phase to become richer in water. The liquid phase moves to the bottom where it is collected.   A sieve tray column and a packed column are available. The packed column is filled with Raschig rings. The reflux ratio is adjusted using actuating valves. Relevant measured values are recorded using sensors and displayed digitally on the control cabinet. The evaporator is adjusted using a PID controller.   A large, clear process diagram on the control cabinet makes it easy to assign all the process variables. The well-structured instructional material sets out the technological fundamentals and provides a step-by-step guide through the measurements and experiments.